Chemical And Structural Formula For Water (H2O)? What Is The Electron Dot Structure For Water?

What is the chemical formula and structural formula for water (H2O)? Also what is the electron dot structure for water?

What is the chemical formula and structural formula for water (H2O)? Also what is the electron dot structure for water?

The chemical formula of H2O:

The above equation for water shows that in a water molecule there are two atoms of hydrogen and one atom of oxygen.

The structural formula of H2O:

The fact that ice floats over water and is not submerged into is because the density of ice is less than that of water. 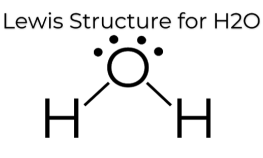 The above diagram is the Lewis Dot Structure for H2O. The diagram shows that Oxygen’s octet appears to have filled up entirely. On the other hand, Hydrogen only has two electrons for its valence shell. As evidenced by the diagram, Hydrogen valence shell has two electrons and is filled up by using shared electrons from Oxygen. The two lone pairs existing with a central Oxygen atom in this way produces unique properties. This creates a bent structure and increases repulsion between electrons to the electron.

View All Reviews
Chemical And Structural Formul... has been added in your library.