According to the history the Japanese armor is thought to have evolved from the ancient Chinese armor. This Suit of armor is known as “modern equipment”. The armor consists of a helmet, cuirasses (body protector) and an iron mask. The helmets and the Cuirasses were manufactured in Japan as early as the 4th century CE. These elements of the armors are much lighter than the older types of armor. This armors were developed to maximize the soldier’s ability to move easily during the battle and protect themselves from the musket fire, which was introduced in the warfare during the 1500s. 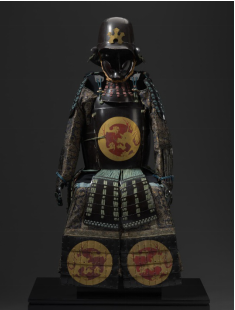 The armor includes a hinged iron cuirass which has probably derived from the western prototype, divides into two welded metal sections. The cuirass were easily wearable and removable; its hardness also provided a superior protection. A divided skirt suspended from the breastplate allowed the soldiers to turn, twist, or jump on their horse along with the afforded protection for hips and thighs. The additional protective gear are the shoulder guards, arm covers, thigh armors which were being worn under the skirt and shin guard. Thin strips and lacquered iron joined with braided silk lancing to make the armor waterproof, flexible and relatively lightweight.

In 16th century started trading with Europe what would have known as Nanban trade. The Japanese acquired the European armor including the cuirass and the comb morion the crested helmet; which the Japanese modified and combined with their domestic armor.

Material used in making the armor

The breastplate is made of two large leather lined iron plates. The other parts are the lacquered iron plates laced together with silk cord in parallel rows. Metal splits linked by chain cover sleeves of blue brocade fabrics. The decoration made over the breast by using the colored lacquered and maki-e designs finished with gold and silver powders.

The reason for figure depicted on the breastplate?

The breastplate is emblazed with the figure of Achala (Japanese: Fudo Myoo), a popular Buddhist deity. The protective character of Achala is indicated by the red bright flames that emanate from his body and his sword. The rope held in the left hand portraits his ability to rein in evil. It has been shown in the breastplate that Achala is running through the waves which portraits a common way of referring to his protective powers. According to the legend while returning from a journey to China, the ship carrying Kukai (a legendary ninth century Buddhist monk), who was caught in a storm. Kukai appealed for to a statue of Achala for protection. Thereafter Kukai attacked the waves with his sword with a vision of angry god, this action of his resulted in calming the storm and saved the ship along with its passengers.

The figure of Achala is identified as a guardian figure for the samurai, often called as “ the Immovable One”, Achala is also called as the quality of being resolutely or dutifully firm and unwavering, even in the middle of danger. His attribute of a sword and wrathful expression make him an apt symbol of the warrior spirit.

View All Reviews
History of Samurai Armor has been added in your library.