Evaluate how effective private solutions may be in solving market failures produced by externalities? Explain the usefulness and shortcomings of the Coase Theorem?

Evaluate how effective private solutions may be in solving market failures produced by externalities? Explain the usefulness and shortcomings of the Coase Theorem? 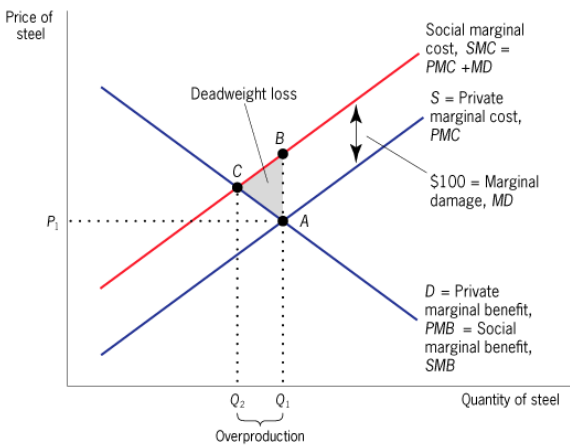 The negative externalities produced by the manufacturing of steel has resulted in the creation of dead weight loss and this dead weight loss can be addressed by remedy sought by the private sector. 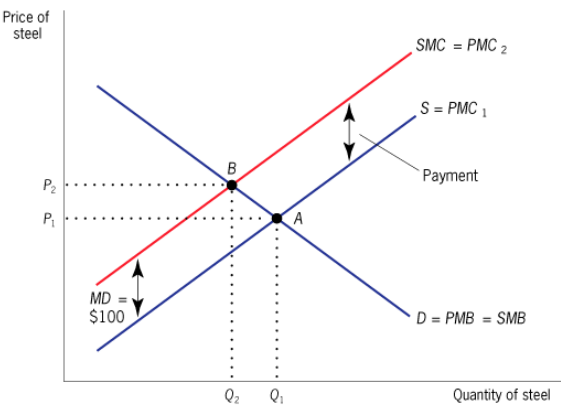 Hence, it can be inferred that sometimes, private actors would sometimes reach efficient outcomes without the interference of government by effectively addressing the externalities. Nevertheless, it is noteworthy to mention that the fundamental problem is ignored by the approach of Coasian as when there are larger number of individuals on the one or both sides of negotiation, then in such scenario, it becomes hard to negotiate.

The market failure is addressed by various types of private solutions such as moral codes, business mergers or contract and charities. Under contracts or business mergers, two business that offers positive externalities to each other can enter into the contract that would make but the parties better off. Furthermore, the behaviour of individual is guided by the moral codes and they might provide an incentive to refrain from doing anything that is unethical or is not in the interest of the individual or the society as a whole. Lastly, charities are other private solution that is intended to limit the behaviour that results in promotion of behaviour that generates negative externalities.

Usefulness and shortcomings of the Coase Theorem

In accordance with the Coase theorem, the private bargaining among the effected parties can help in eliminating the market failure due to property rights. It is pointed out by the theorem that there can be optimum allocation of resources by the perfectly competitive economy even under the conditions of externality. This can happen when the transaction and marketable cost are zero and property rights are defined clearly. When there is transaction cost, there exist the opportunities when choice of one person impacts the choice of others.

In addition to this, the theorem helps in providing natural links between law and economics and deciding on the rules of external liability by offering an efficiency rationale. The liability rules of the theorem helps in achieving optimality when the information is imperfect and bargaining is costly. It also states that the party that have to incur least cost in dealing with the externality harmful effects are responsible for paying the cost.

It is signified by the coarse theorem that economic efficiency is promoted by marketable and well defined property rights and Pareto optimality can be achieved using the mechanism of market despite the externalities are present. This is so because the externalities can be removed by devising a private bargaining solution. The institutional base do not matter if in the real world, the transaction costs are similar. Hence, distribution and efficiency will be impacted differently by the different institution and therefore it is indispensable to make comparative institutional analysis. Furthermore, the final outcome under the Coase theorem is significant in the absence of transaction cost and given an assignment property rights.

The success of Coasian solution is limited by the number of solutions and the limitations of the theorem has been found in assigning the holdout problems, property rights, free rider problem and transaction cost that is higher than zero. Coase theorem is based on the zero transaction cost adequacy that acts as a proxy for the perfect competition. It is unlikely that the monopoly marketer such as Railway Company will act like competitive market despite the fact that the contrary is claimed by the theorem. The bargaining process for the legal entitlement will be thwarted by the imperfect competition and this would lead to a situation of Prisoners dilemma.

It is not possible for many externalities to internalize as many externalities has the characteristics that make unfeasible competitive market.  The initial allocation of the property rights form the basis of forms the basis of demand for goods and services. This is so because there is distribution consequences of wealth because of initial allocation of entitlement irrespective of the inadequacies of the approximation of zero transaction costs. As a consequence of this, the initial legal decision forms the basis of efficient outcome.

In a situation, involving few parties and it is possible to assign the property rights, there is a likelihood of seeing a solution that is similar to the one suggested by Coase. This can be explained with the help of an example, say, neighbour of a person owns a property that has a steep hill which is perfect for climbing. The neighbour built a fence because he is afraid that anyone being injured would be liable to him and it will not be socially efficient. This is so because the climbers would not receive any benefits from climbing. In such scenario, there exist a room for negotiation as the rock climbers might be willing to pay for climbing the rock. In turn, the neighbours might be willing to accept the payment for hedging a risk when the neighbour is found liable when the climber is injured. However, if the no liability contract is signed by the neighbour with the hill owner, then it is possible to reach a similar Coasian solution.  In this situation, in order to gain from the benefits of climbing the rock as some values are getting exchanged. The negative externalities created by the pollution can be dealt in the cap and trade markets by viewing the permits as the property rights assignment. The outcome of Coasian can be seen in such types of market.

View All Reviews
How Effective Private Solution... has been added in your library.