To evaluate a project or investment, the method, which is generally used, is called Capital Budgeting. To construct a plant or in case of investing a large amount in an outside venture, it is required to do capital budgeting before they are approved or rejected. Through the using of capital budgeting system, generally, the company evaluate whether a sufficient return would be generated during the project lifetime or not. In case of computation the capital budgeting various methods are applied, those are like Net present value (NPV), Internal Rate of Return (IRR), Pay-Back period and  Discounting Cash flow method.

The Internal rate of Return (IRR) is a percentage discount rate used in capital investment appraisal which brings the cost of a project and its future cash flows into equality. It is the rate of return which is equal to the present value of anticipated net cash flows with the initial outlays. IRR is the rate generally at which Net present value is zero. The rate for computing IRR depends on the bank lending rate or opportunity cost of funds to invest which is usually called as personal discounting rate or accounting rate. The test of profitability of a project is the relationship between the IRR (%) of the project and the minimum acceptable rate of return (%). The IRR is to be obtained by using the trial and error method to ascertain the discounting rate at which the present value of cash inflows will be equal to the present value of cash outflows; such method is generally used if the cash inflow is not uniform during the project lifetime. It is necessary to have an approximate idea about the discounting rate generally the factor, which is used to ascertain the actual discounting rate. The factor reflects the same relationship of investment and cash inflows as used in case of payback period calculations. Generally a higher IRR comparing with the weighted average cost of capital suggesting the project is quite profitable. The IRR rule is shows if the IRR > cost of capital = project can be accepted (Depends on other factors) and if the IRR< cost of capital = project probably rejected.

In case of computation of IRR generally an equation method is followed and such equation is like;

Example 1:  Started a project with investing 1000 as cash outflow, which is resulted to 1250 at the end of one year, calculate rate of return in case of this investment.

Example 2: A company has to select one of the following two projects.

Calculate the internal rate of return to suggest which project should adopted.

The actual rate of return will be;

The actual rate of return will be;

Thus, Internal Rate of Return in case of project A is higher as compared to project B. hence the project A is preferable.

Out of various method in case of computation capital budgeting the IRR method having the following advantages;

Using the Internal Rate of return having the following disadvantages;

Methods that need to be followed in a situation of Multiple Internal Rate of Return:

Generally, in a project when at least one future cash inflow is followed by cash outflow, then a situation of multiple internal rates of return arises. In other ways, when there is a negative value after a positive value, or there is a sign of cash flows changes more than once. Usually, the discount rate is used for the borrowing cash flow, and IRR is used for investment cash flow. In a situation where the money is initially investing, the high rate of return is the best, but in case of receives more than one possesses, the low price of return is the choose one. However, in these circumstances, the high rate or flat rate of IRR, which one is favorable not even decided. Sometimes there may be a situation when, for a particular project, there is various other IRR. Usually, the projects that initiated in strip mines, nuclear power plants where usually a significant cash outflow amounted at the end of the project.

In general, when a project that initiated has multiple IRR, it is best to compute the IRR of the project with benefits to reinvest. Similarly, a Modified Internal rate of return (MIRR) is used in which it is assumed that the amount of reinvesting is equal to the projects’ cost of capital. Usually, the investment decision for a particular project is made by comparing the internal rate of return of the project with the hurdle rate or the minimum rate of return which the company is considered as a benchmark to ascertain minimum performance. If the IRR is higher from the hurdle rate it will be accepted otherwise in case of lower it will be rejected. However, there is some particular situation when more than one IRR is reflected to compare with the hurdle rate. The regular cash flow pattern is such in which cash flow change sign only at once that all the net cash inflows generally equal with all the net cash outflows that occur at the start of the projects. However, in the case of Non-conventional cash flows, there are non-continuous streams of net cash inflows and outflows.

The following illustration is disclosing the changes between the current and Non-conventional cash flows.

In the case of the first series, it shows the conventional cash flow system as there are some different cash flows generated in different years. It can be derived from the above sequence that the IRR, in this case, is 18.95% whereas the second series is showing the non-conventional cash flows, the same amount of cash inflows during the project life. In the case of the second series, there is two IRR’s, i.e. 6.77% and 65.36% in that series of return cash flows are in positives. The IRR decisions rules generally make the difference between the IRR and hurdle rate. In the case of two IRR’s price naturally, there is a conflict situation arises to determine the actual rate. To overcome this obstacles part of different IRR’s and for the unrealistic reinvestment rate purpose, need to choose the Net present Value method as a capital budgeting tool that may provide to ascertain the real value of the return of the project during the lifetime. Such Net current worth is more accurate to reflect the actual cost of the business. IRR usually used to measures the investment efficiency in a situation of capital constrained. Moreover, in the case of different IRR, it is better to choose the NPV method to arise the result of the rate of return.

In capital budgeting one of the important method to calculate the financial measure of an investment is Modified Internal rate of return. This method is generally used to rank alternative investments with equal size. As the name reflecting this is same as internal rate of return method but with some modification. In case of IRR generally it is assume that the positive cash flows are reinvested with the same rate of return that generate from the same project. However it is usually an unrealistic event may not possible to occur positively and the situation which is generally reflects that was the reinvestment amount will be equal to the rate of cost of capital. In case of comparing different projects it is better to used weighted average cost of capital for reinvestment of cash flows. Again when there is a situation of more than one IRR in a particular project with positive or negative cash flows, in that case MIRR method is helpful as it’s used to ascertain only one value of rate of return.

Example:  compute the MIRR of a project valued to $ 100000, with cost of capital 10% and reinvestment rate is 8%. With the following series of cash flows; 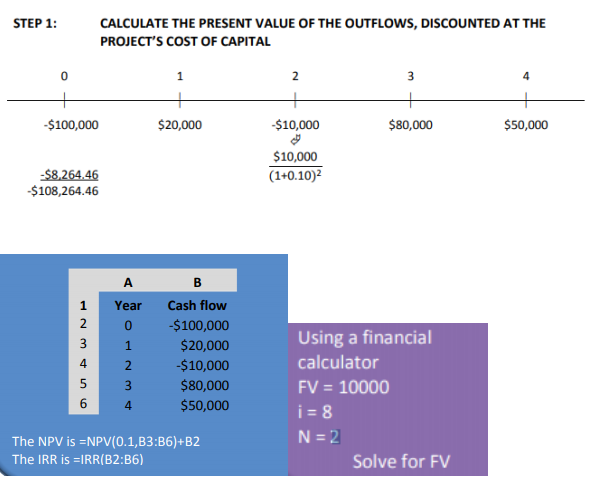 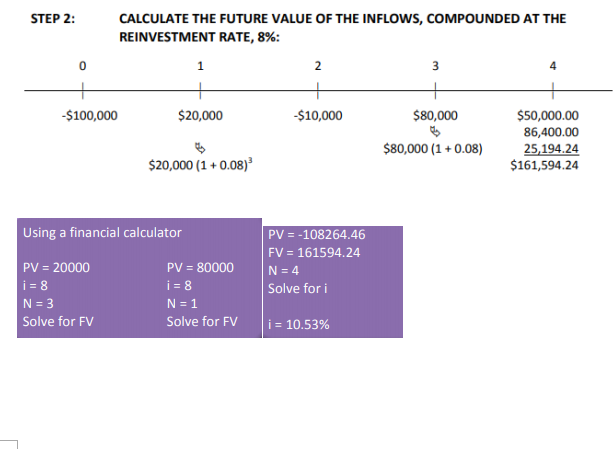 Step 4: As here the MIRR is 10.53% is greater than the project’s cost of capital with 10% the project should be acceptable by the management.

View All Reviews
How Internal Rate Of Return Is... has been added in your library.