Nucleus, Its Function And Structure

What are the nucleus definition, function and structure? Also explain the differences between chromosomes, chromatids and chromatin?

What are the nucleus definition, function and structure? Also explain the differences between chromosomes, chromatids and chromatin?

Nucleus, Its Function And Structure

The cell is the functional unit of life. The cell consist of various functional organelles, nucleus is one of the organelle having multiple function in the cell. It is present in most of the cell but there are exceptions like blue-green algae and bacteria. Nucleus is known as the “control center” of the cell. It was discovered by Robert Brown in the year 1831. In the year 1774, the nucleolus was discovered by Felice Fontana in eel cell. The nucleus is basically a membrane bound organelle found in eukaryotic cells. Most of the eukaryotes have single nucleus but very few cell such as red-blood cell of mammalian have no nuclei and others like osteoclasts have many nuclei. The nucleus contains cell genome, except for small fraction of mitochondrial DNA, which is organized as multiple long linear DNA molecules.

Structure of the Nucleus

The membrane forms a continuous network with the endoplasmic reticulum of the cell. The membrane acts as a barrier between the contents of the nucleus and the cytoplasm. The nucleus consists of nucleoplasm, the nucleolus and chromatin fibers. Usually a cell contains one nucleus, but under some condition the nucleus tends to divide but the cytoplasm does not. The division produces a multinucleate cell called syncytium. The substances present in the nucleus other than the chromatin is called as nucleoplasm. It usually contains enzymes and complexes which are necessary for synthesis of RNA molecule and DNA synthesis. There are one or more than one nucleoli present in the nucleus. The nucleolus consists of proteins associated with RNA. The nucleus is responsible for all the genetic activities of the cell.

The main function of nucleus is to store the hereditary material, or DNA, and it is responsible for carrying out the cell activities including intermediary metabolism, growth, protein synthesis and reproduction that is division of cell.

Nucleus contains of all the genetic information in its chromatin. The genetic information is maintained in the form of spirally arranged strands called as DNA; this DNA is arranged in the form threads called as chromatin. The chromatin threads of DNA are wrapped around a set of histone proteins. The chromatin condenses into chromosomes as the DNA can be transported to daughter cells, when the cell undergoes division. The DNA replication takes place inside the nucleus.

Due to structural proteins, synthesized by the nucleus, helps the newly formed cells to grow in size. 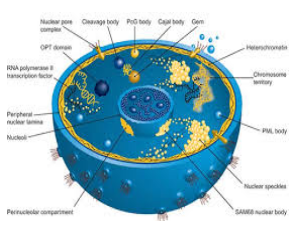 The difference between Chromosomes, Chromatids and Chromatin.

When all the chromosomes are add up, each cell contains 2m of DNA and this DNA needs to be fit into the nucleus of cell. It is like trying to stuff a piece of string into a tiny bead which is smaller than 1cm. In order to make this possible the cells are featured by ingenious packaging system. The DNA is wrapped around special proteins called histones and it forms into DNA-protein complex known as chromatin.

During cell division in S-phase, the replication of DNA takes place which produces two identical copies of DNA, connected to each other at the centromere. This X-like structure is known as sister chromatid pair or each as chromatids. 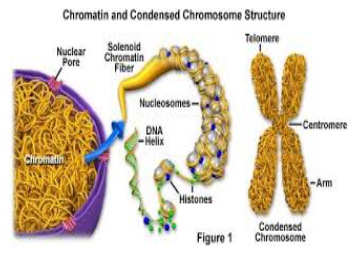 The above picture showing chromosomes, chromatin and chromatids

View All Reviews
Nucleus, Its Function And Stru... has been added in your library.