What Are Matrices? Describe The Parts Of Matrices And What They Represent

What are matrices? Describe the various parts of matrices and what they represent.

What are matrices? Describe the various parts of matrices and what they represent.

A set of number which is arranged in rows and column to form a rectangular array of number, symbols or expressions is called matrix. The numbers allocated in the rows and columns are called the elements or entities of the matrix.

The elements of horizontal and vertical lines in a matrix is called the rows and columns respectively. The size of the matrix is defined by the number of rows and columns that it contains. The matrix with m rows and n columns is represented as m x n matrix, where m and n are the dimensions of the matrix. A matrix is generally written in box brackets. For an example which has two rows and three columns will be represented as 2 x 3 matrix, as show in below:

The individual items (numbers, symbol or expression) are the elements or entities of the matrix. Provided that they are of same size then two matrices can be added or subtracted element by element. However, in matrix multiplication the required condition is that the number of column in the first matrix must be equal to the number of rows in the second matrix. Any matrix can be multiplied with a scalar form associated with it.

These techniques can be used to calculate the sums, differences and products such as sodas come three different flavor like mango, orange and apple with two different types of packaging like bottle and can. Two tables summarizing the total sales between last month and this month are written to illustrate the amounts. Matrix addition, subtraction and scalar multiplication can be used to find such things as: the sales of last month and the sales of this month, the average sales for each flavor and packaging of soda in the 22-month period.

The matrices are used to list down the data or to represent a system, as because the entities or elements are numbers. Hence, matrix addition can be performed to get the corresponding entities. In order to perform the matrix addition between two or more matrices, the elements of the matrices must of same dimensions. The matrix addition is commutative as well as associative in nature. Hence the following conditions are true:

The addition of matrix is very simple, the elements from the first matrix is added with the corresponding elements of the second matrix.

The element of the first matrix A11 = 4 is subtracted from the element B11 = -2 of the second matrix to produce the resultant matrix X11 = 6, the resultant matrix will also be a 2 x 2 matrix as the both matrices among which the subtraction is performed are 2 x 2. It is not possible to subtract the matrices with different dimensions.

In an intuitive geometrical context, scalar multiplication of a real Euclidean vector by a positive real number multiplies the magnitude of the vector without changing its direction. For an example multiplying a matrix by 4 means the same thing; you add the matrix to itself 4 times, or simply multiply each element by that constant.

The resulting matrix has the same dimensions as the original. Scalar multiplication has the following properties:

In matrix multiplication, the elements of the rows in the first matrix are multiplied with corresponding columns in the second matrix. For two matrices the final position of the product is shown below:

The figure: 1.0 illustrates diagrammatically the product of two matrices A and B, showing how each intersection in the product matrix corresponds to a row of A and a column of B 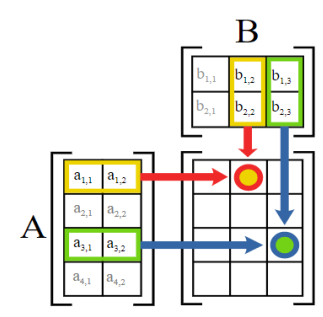 The various parts of matrices

There are several types of matrices, but the most commonly used are:

10. Transpose of a Matrix

A matrix is said to be a row matrix if it has only one row.

A matrix is said to be a column matrix if it has only one column.

A square matrix is said to be diagonal if at least one element of principal diagonal is non-zero and all the other elements are zero.

A diagonal matrix is said to be scalar if all of its diagonal elements are the same.

A diagonal matrix is said to be identity if all of its diagonal elements are equal to one, denoted by I. 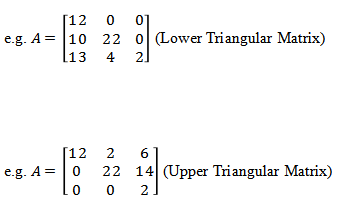 A matrix is said to be a null or zero matrix if all of its elements are equal to zero. It is denoted by O.

Transpose of a Matrix:

Suppose A is a given matrix, then the matrix obtained by interchanging its rows into columns is called the transpose of A. It is denoted by At.

View All Reviews
What Are Matrices? Describe... has been added in your library.