Explore what happens to the domestic price of a good, consumer surplus, and producer surplus, when an autarkic country opens to trade? What will happen if you remove a product from an equilibrium system? What causes equilibrium to shift?

Explore what happens to the domestic price of a good, consumer surplus, and producer surplus, when an autarkic country opens to trade? What will happen if you remove a product from an equilibrium system? What causes equilibrium to shift?

Autarky is the economic situation with the state of self-sufficiency and limited trade.  Country is said to be in a complete state of autarky which indicates that the country is not engaged in the international trade with any other country. For understanding the situation of the open trade and the impact it creates on the producer surplus, consumer surplus and the domestic price of the goods, the Ricardian model of international trade has to be accounted for. It is indicated by the Ricardian model of the international trade which, shows that the two countries are better off when they trade compared to the autarky. The corner stone of the global economy is the Ricardian model of international economy helps in explaining the difference in the comparative advantage across the nations based on technological differences. This technological difference is attributable to the supply side differences between the countries involved in the trade. The autarkic term of trade as per this model is determined by the parameters of technology and the demand not forming the international trade basis. In the autarkic equilibrium, the composition of the output is determined by using both relative supply and relative demand. It is only after opening of the trade, demand plays an important role in determining the international terms of trade.

Each of the two countries under autarkic condition produces some combination of two goods. These two countries are motivated to specialize in the production of those goods in which they enjoy comparative advantage after the trade becomes possible. Specialization of the goods in which the country enjoy comparative advantage helps in allocating of the scare resources to the most productive uses. At aggregate level, people in both the countries end up consuming more of both the goods compared to the situation in the absence of trade. The welfare of both the countries is improved as the equilibrium curve shifts to the higher indifference curve. Higher indifference curve means higher consumption and this implies greater satisfaction. It is therefore concluded by the Ricardian model that all the participants to the trade is benefitted from the international trade.

Therefore, there is a complete specialization with country X producing no wine and only clothes. It is indicated by the terms of trade that the consumption in both the countries has gone beyond their PPF. The production of clothes by country X has increased to 9000 yard which is then traded to country Y at the rate of 2.5 yard for a barrel of wine. Now, the production and consumption is different in both the countries with trade. For country X, the indifference curve would shift upper side as the total amount of production of clothes of 9000 yards is divided between both the countries. 6000 yards is consumed by country X and the rest is exported to Y in exchange of wine. However, at the same terms of trade, 1200 barrel of wine can be purchased by exporting 3000 yards of clothes. On other hand, country Y is specializing by producing 4000 barrels of wine and is selling 1200 barrels for 3000 yards of clothes. It has now 2800 barrels of wine for consuming and has as much clothes as it has before the trade or in the autarkic situation. There is 300 more barrels of wine after opening up of trade. Therefore, with the international trade and specialization, country X has gained 200 barrels of wine. Hence, it can be inferred that both the countries have gained from international trade.

The situation of consumer and producer surplus after and before international trade can be explained graphically. 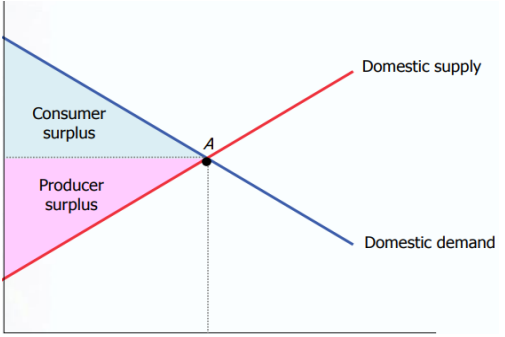 The above graph shows the equilibrium point A before the trade that is at autarky, where the domestic demand is equivalent to supply. The pink shaded area represents producer surplus and the blue shaded area represents the consumer surplus. There is a definite amount of quantity that is demanded and supplied at the equilibrium before opening up of trade. Now, when the trade opens up, there arise a situation of import and export. This can be again explained with the help of a graph. 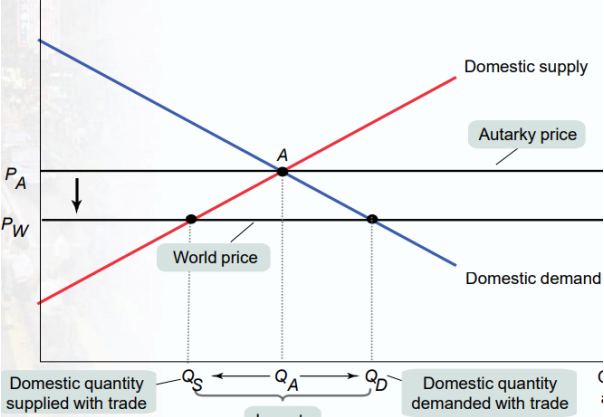 The graph above shows a scenario after opening up of trade and with the trade, the world price is pushed downward. With the falling price, the quantity supplied by the supplier in the domestic country falls down to QS, while there is an increase in the quantity of goods demanded at the domestic level indicated by QD. The excess of quantity demanded at the domestic level is represented by the gap QS - QD. Therefore, it can be observed that with the opening up of trade, domestic demand has increased with falling world price.

Now, this excess demand in the domestic country can be fulfilled by importing the goods from other country which would create an impact on both producer and consumer surplus. 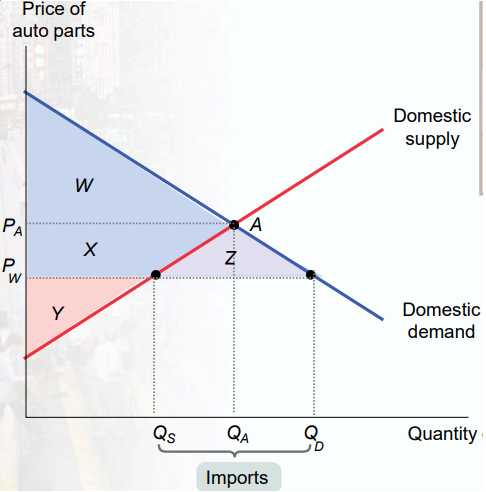 The above graph represents the impact of consumer and producer surplus due to opening up of trade. It can be seen from the above graph that there is an increase in the consumer surplus indicated by the area blue that is area X and area Z. That is consumers are now getting lager quantity of goods at the lower price compared to autarky situation. In addition to this, the producer is incurring loss as they larger quantity of goods is being supplied at lowest price after trade. The loss in producer surplus is indicated by the area X. Therefore, with the opening up of trade that is due to the import of the goods from other country, there is a gain in consumer surplus and loss in producer surplus of the domestic country

Now, let us consider a scenario of exporting the goods and how it impacts consumer and producer surplus. 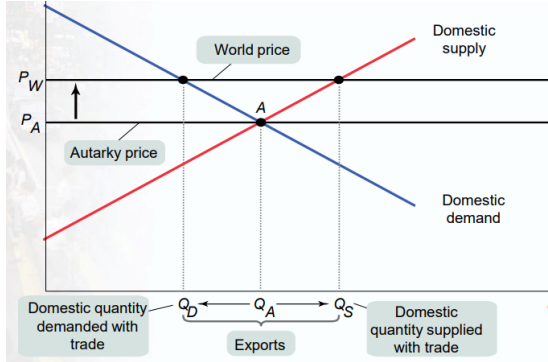 Trade would result in export if the autarky price is lower than the world price and compared to the world price, there would be rise in the domestic price. The trade results in overall gain because as the gain to producers exceeds the losses to consumers. 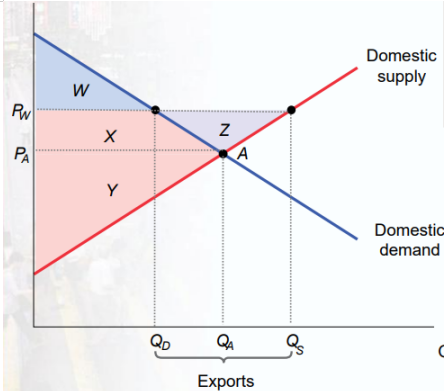 What will happen if you remove a product from an equilibrium system? What causes equilibrium to shift?

The international trade results in increasing and decreasing the products from the equilibrium system due to import and exports. Such increase and decrease causes the equilibrium to either shift upward or downward. With shifting of the equilibrium system, the quantity of the products supplied and consumed along with the price increases and decreases. It is already a known fact that the competitive advantage forms the basis of the international trade which causes a relative differences in the factor endowments and resources. The differences in the consumption patter is depicted by the differences in the relative prices of the product rather than the difference in taste. From the discussion above, it can be seen that with opening up of trade, the quantity and price of the goods produced in the domestic country is getting impacted and which is causing the equilibrium point to shift. With the changes brought by the trade, there is occurrence of new equilibrium point where new quantity and product is demanded. Therefore, it can be inferred that the import and export of the products between two countries cause the equilibrium to shift as there is a change in the supply and demand of the goods produced and consumed domestically.

Overall Feedback from lecture: This a good piece of work. Clearly there is a very solid foundation here for you to build on and so hopefully the following feedback will help you improve further. Concerning coverage, you have successfully completed ...

A very well written post, thank you for the expert who worked on this and look forward to continue working with you on the remaining 40 discussion post yet to come.

View All Reviews
What Happens To The Domestic P... has been added in your library.