What Is The Graph Of A Quadratic Function Called? Discuss Its Significance In Detail

What is the graph of a quadratic function called? Also, discuss its significance in detail.

What is the graph of a quadratic function called? Also, discuss its significance in detail.

Definition of a Graph of a quadratic function:

where a, b, and c are constants and

. In a quadratic function there is a power of two or one independent variable and that is the highest power. Graph of a quadratic function is known as the parabola and has a curved shape. One of the main points of a parabola is defined as its vertex. Vertex is the highest or the lowest point on a graph. The general technique for graphing quadratics is same as that of linear equations. The only difference is that the graph of quadratic equations is curvy and the graphs of linear equations are straight lines while taking other considerations.

Significance of a graph of a quadratic function:

if a < 0, then the parabola opens down 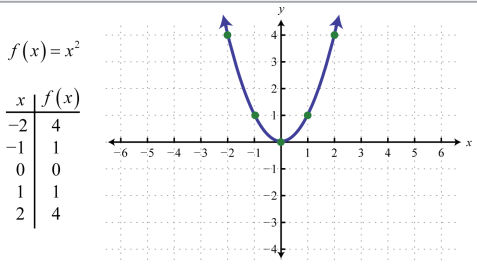 The general curve that is hence produced is known as the parabola and is shared by the graphs of all quadratic functions. A graph is indeed defined as  a function that passes through a vertical line test. Moreover the domain of the function consists of all sets of all real numbers (−∞,∞)(−∞,∞) and the range consists of a set of non-negative numbers (0,∞). While graphing parabola it becomes essential to include certain special points in the graph. The y –intercept is defined as the point by which the graph intersects the y- axis. The x-intercepts are defined as a point in the graph that intersects the x-axis. The vertex can be hence defined as a point that extends to the maximum and minimum of a graph. The line of symmetry is defined as a vertical line through the vertex where the parabola is symmetric. For any parabola, the first and foremost thing that needs to be done is to find the vertex and the y-intercept of a quadratic function. In addition to this, if there exist the x-intercept then it is important to determine both as well. Guessing the x-values of these special points will help in developing technique that will facilitate in finding them. Many of these techniques are used extensively in case of algebra. A graph of quadratic function is a curve and is known as the parabola. Parabolas may open upwards or downwards and vary in width or steepness having the same basic U shape. The points on a graph represent the possible solutions to the equations based on the high and low points in a parabola. The minimum and maximum points can be used in tandem with the known numbers and variables to average the other points on the graph. Finding the equation of parabola gives us certain data points which are an important skill in mathematics. Parabolas are very useful for mathematics modeling because of their simplicity.

View All Reviews
What Is The Graph Of A Q... has been added in your library.