Times Higher Education, the leading educational publication, has released the rankings of top 10 UK universities for students’ experience. The survey result is determined by 21 separate measures or indicators, based on the response of over 14,700 undergraduates. Only the universities with more than 50 responses have been included in this prestigious list. 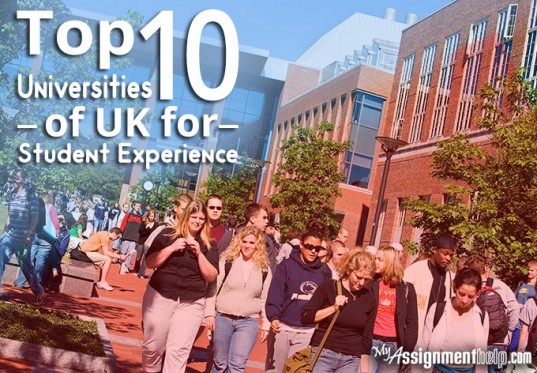 Established in 1834, this public research university jumped six places to enter the top 10 for the first time. The university received 170 responses, scoring the most in social life and library opening hours.

With a response from 248 students, University of Leeds retained its position. It secured the highest rating in extra-curricular activities and the quality of the student’s union.

The University of Exeter secured the 8th position, dropping one place from last year’s ranking. Located in South West England, it has scored the most in campus environment. The university also received excellent ratings in quality and opening hours of the library from its 193 respondents.

Jointly ranked at sixth place, it fell three places from the last year’s rankings. One hundred and fifty seven students responded for this 50-year-old university. The university received stable and consistent ratings in all the fields, scoring excellent grades in sporting and library facilities.

University of Surrey performed exceedingly well this year to jump 28 spots to secure the joint sixth place. Scoring the highest in sports facilities, the ratings increased significantly with the increased intake of high grade students.

The oldest university in the English speaking nations slipped one place, securing the 5th position. The University of Oxford received 219 responses, scoring highly in all the major categories. The university also became the joint first for best quality staff and lectures.

Ascending two places, University of Cambridge ranked fourth, scoring the most in extra-curricular activities and quality of staff and lectures. Two hundred and nineteen students voted for this illustrious institution which provides higher education in more than 100 subjects.

Though it lost the top rank, still this leading research and teaching university secured an admiring third position. The University of Sheffield received 272 responses overall, scoring high ratings in all the indicators. Among all the categories, the university received the best grades in student’s union.

Appearing for the first time in the top 10, Loughborough University enthralled its respondents with the best quality facilities. It climbed 9 places to secure the runners-up position. The University will commemorate its 50th foundation day this year. Definitely this remarkable achievement will escalate the celebrations.

Securing the most prestigious position, University of Bath bettered its ranking this year by one place. It scored the most in industry connections, campus environment, security and library facilities from its 180 respondents.

Without a doubt, it can thus be easily concluded that securing the top slot has made University of Bath the best institution in UK for students’ experience and satisfaction.

UK has evolved as one of the most prominent educational hubs where the most celebrated institutions are located. MyAssignmenthelp.com provides impeccable assistance to the students studying in these prestigious universities and colleges. With a team of experienced academic experts, it provides essay help and assignment help in every subject.

How to Write an Obituary? – Write a Thoughtful Piece

How to Write a Power Packed Formal Letter?

How to Write a Lab Report?