Ah Lee, a financial manager at a US based mid-sized manufacturing firm, has been caught off-guard before. In an effort to earn the most on excess cash, Ah Lee once bought five-year US Treasury bonds (a maturity longer than the firm’s liabilities) only to see interest rates rise. The loss when the Treasury bonds were sold did not make Ah Lee’s supervisor, Carlo, Chief Financial Officer, very happy.

Ah Lee is now in a similar situation - Carlo has asked for a recommendation on the investment of another $10 million in excess cash.

The risk of unexpected changes in interest rates is a given with coupon-paying bonds. Even if the bonds are held to maturity, there is reinvestment risk. A bond’s exposure

to interest rate risk depends on the size and the number of coupon payments made to the bondholder. The realized return from a bond depends on the rates at which the coupons are invested; the rates can only be estimated at the time the bond is purchased.

Given estimates of futures interest rates, however, the expected realized compound yield (RCY) can be calculated in order to cope with the reinvestment problem. For a bond that pays annual coupons over n years, the appropriate calculation for the annualized return is:

The total future dollar value from the investment includes the coupon payments, the earnings on each coupon, and the value of the bond at the end of the holding period.  In estimating the future dollars from a bond purchase, Ah Lee needs a forecast of the direction and level of future interest rates. At yesterday’s investment meeting, Carlo stated his belief that interest rates would remain unchanged for the next three years because of an unchanging expected inflation rate. Ah Cheung, another financial manager at the firm and someone that has earned Carlo’s respect for his reasoned judgment, suggests Ah Lee use the current term structure to gauge interest rate expectations. He uses the following table from Federal Reserve Statistical Release H.15 to get current spot rates on one-, two-, and three-year constant maturity Treasury securities. (See table below)/ 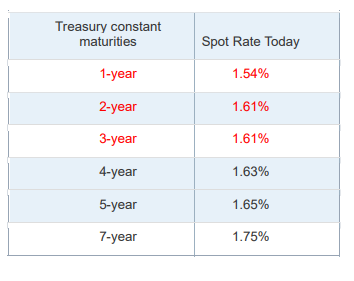 "Carlo will accept a recommendation different than his own only if it is justified by analysis," advises Ah Cheung. "Well-reasoned analysis is an opportunity to gain back some of Carlo’ trust, which was lost after your last bond purchase."

Ah Lee’s problem is to recommend the best investment among three different US Treasury bonds. The $10 million investment will be liquidated in three years to help repay a bank loan charging a fixed rate interest at 8.50% per year. The bonds, each with a $1,000 par value and annual convention, are described as following:

1. Would Ah Lee go by Carol’s view on interest rate remain unchanged for the next 3 years? Why or why not?

(i) Analyse the durations of the 3 bonds and why does that matter in the analysis? Explain.

3. Explain your recommendation on the investment of $10 million?

16 More Pages to Come in This Document. Get access to the complete answer.