The DC motor is a common actuator in control system applications, providing rotational motion for applications such as mobile robots. The motor’s input voltage   applied to its armature and motor’s output speed   are related by the following equations
where   is the armature current and parameters L,R,K_t,J,b,K_e are physical parameters of the motor described in Table 1 below with sample values for purposes of this project.
1. By taking the Laplace transform of equations (1) and (2), derive the motor transfer function For simplicity, we took .  (5 marks)

The pilot wants to be able to control the pitch angle, and does so ultimately by rotating the front fins, and tail elevators of the aircraft, shown in Fig. 2.  The first task is therefore to model the effect of these movements on the "pitch rate and "normal acceleration
1. Normal Acceleration
The acceleration of the aircraft in a direction perpendicular to its axis, (the "normal accel.",  ), is determined mainly by the angle   of the tail elevators of the aircraft shown in Fig. 2.  Indeed aerodynamic modelling shows that this relationship can be described by the differential equation 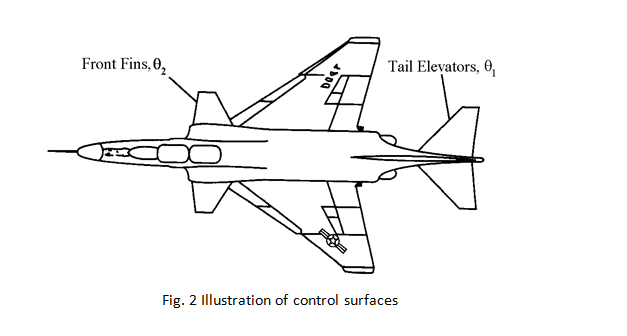 The rate at which the pitch angle changes, (the "pitch rate", q), is determined mainly by the angle   of the front fins of the aircraft shown in Fig. 2. Indeed aerodynamic modelling shows that this relationship can be described by the differential equation
q ̈+3.1q ̇-8.82q=7.25θ ̇_2+11.27θ_2
Convert this relationship into a transfer function form (3 marks)

21 More Pages to Come in This Document. Get access to the complete answer.