Creating engaging lessons that include activities and assessments aligned to objectives and course outcomes is one of the responsibilities of a higher education instructor. While it is not always nece ...

It has always been interesting to see how a teacher writes down the formula of various compounds with different subscripts of each symbol in the formula, example Na2S, HCl, K2O, MgCl2 etc. You might have wondered how much time they might have spent on memorizing the formulae for all these compounds.

How do you know that the formula of Magnesium chloride is MgCl2, and not Mg2Cl or MgCl, or Mg2Cl4! Here we will learn all the trick to write the formulae for ionic compounds. Ionic compounds are  generally formed by mixing metal and nonmetal ions or rather positive and negative ions.

Beads, dice, and the bigger well-plate (or any tray or lid to hold the beads and dice), periodic table to identify the element from the atomic number (=# of protons), camera to capture pictures

Method
Pick the right number of beads and dice in the well plates (tray) to show the models for corresponding ions or atoms and vice versa. Remember the atomic number is the number of protons.

So, you should be able to find the atomic symbol from the Periodic Table. See the example given in the first box. Take pictures and paste in the corresponding boxes. Complete all the cells with the correct information

Compounds are mainly classified as Ionic and molecular (covalent) compounds.

Metal ions (positive cations) in nature electrostatically attracts enough number of counter ions (oppositely charged negative anions) to balance or neutralize the charge on it. This makes an ionic bond. In an ionic compound the entire material is made of repetitive units of negative and positive ions.

Positive metal ions are known by the name of the metal say Calcium ion, Sodium ion etc. However negative anions of nonmetal atoms are tweaked as “ide” in ions like chlorine as chloride ion, oxygen as oxide ion etc. 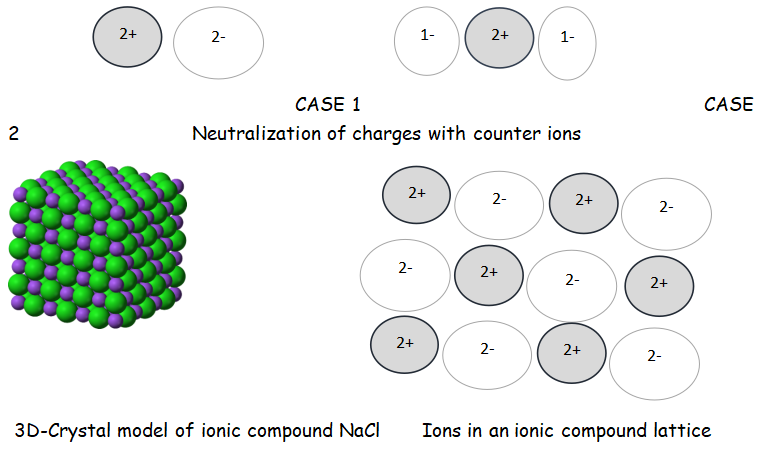 Right-click copy, and paste the following pictures (sticky rectangle with charges written) with correct ionic charges in the compound table (Table 2) to make the model of the neutral compounds.

Complete the following table by pasting the model for the following ionic compounds Label them with chemical formula and ionic charge.

Dissociation of Ions and Conductivity in water (aqueous solutions)

To illustrate the reverse process of ionic bond formation in Task 2. Most of the ionic compound dissolve in water and form solvated (hydrated) free ions back. When free ions are available in a solution it can act as an electrolyte to conduct electricity. The more the ions present higher the conductivity of the electrolyte solution.

Wear gloves. Take 10 drops of each solution mentioned in the following table in separate clean wells of the bigger well-plate. Connect the multimeter to the black and red leads. Turn the knob to 2000kΩ.

Turn the second well plate upside down to use as a platform to streak the solution as shown in the first picture. Otherwise take a white aper strip and lay it on top of the plate, label with a pencil and smear the solutions on it.

Turn on the multimeter and pin the probes into the solution smear or metal or powder strip. The leads should be at least one centimeter apart as shown above. Record the resistivity value displayed. It may be unsteady, but take a rough estimate and record as the resistivity.  Say the value is jumping between 450 and 550 kΩ, write it as 500 kΩ.

Before putting the probe in the next material solution wash the probe and dry with a paper towel. If there is very little or no resistivity (highly conductive)it will show 0.00, If it shows “1” that means the resistivity is very high (no conductivity) and is an insulator.

5 Describe the difference between ionic and molecular compounds in terms of the types of elements/atoms present.

126 More Pages to Come in This Document. Get access to the complete answer.